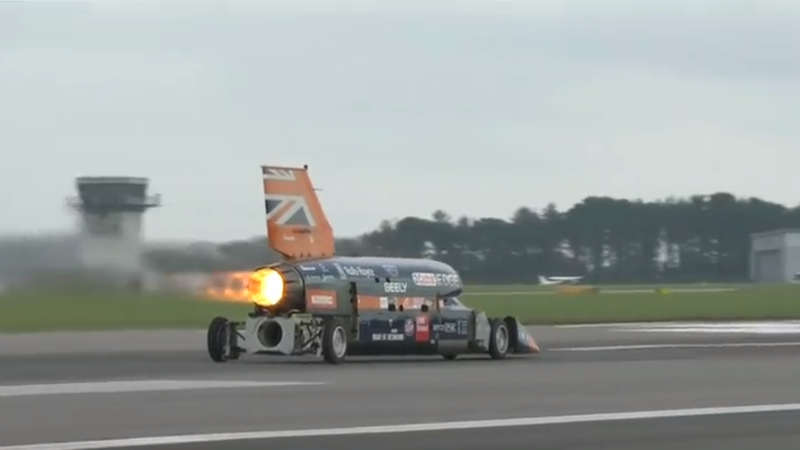 Bloodhound SSC has completed the next step on its journey to the world land speed record with successful test runs at Newquay Airport.  Reaching speeds of more than 200mph, the project seems on course for the planned 1000mph world record attempt in 2019.

In front of a passionate crowd of over 3500, the test runs took place on the Newquay Airport runway and saw Bloodhound SSC get to 210mph in just eight seconds.

Whilst obviously a long way from supersonic speeds, the goal of the test runs was to benchmark the performance of Bloodhound’s systems and to familiarise the support team with the processes they’ll use on a future world record attempt.  Even at these low speeds, the engine is exceeding expectations modelled by the team which bodes very well for the future.

Preparations will now begin for an attempt at over 600mph next year before attention switches to South Africa and the project’s chosen track at Hakskeen Pan.  This location should be perfect for an attempt at the land speed record and then the final goal, 1000 mph.

Andy Green commented “The design and engineering team has done an incredible job with Bloodhound SSC. There is development work still to do, of course, but straight out of the box it feels responsive, stable and, above all, tremendously fast.

“Although 210mph is far below the Car’s ultimate target of 1,000mph, today was a proper workout for the vehicle. The Car is designed for high speed on a desert rather than sprint performance off the line, but it still accelerated from zero to 210mph in less than 8 seconds. It’s also notable for being the longest period that we’ve run the Car for, at around 21.5 minutes – and remember it’s designed to run for just 2 minutes at a time in the desert.”