Is Nuclear Propulsion the future of Space Exploration?

The 2015 Ridley Scott blockbuster The Martian starring Matt Damon depicted a near future in which we sent a team of scientists to determine the viability of colonising Mars.

Needless to say, things go sideways and the team end up stranding Damon’s character – Mark Watney – on the Red Planet.

In amongst the themes of self-dependence, triumph of the human spirit and some cutting humour there was some seriously cool tech on display. Amongst which was the nuclear-powered craft that brought them down from their orbiting craft in the first place.

Nuclear energy has been a sensitive subject for decades. Nuclear power stations are used all over the world and seen by many as a viable replacement to coal and natural gas.

However, others fear it as a barely understood technology and cite Chernobyl as all the evidence needed that humans are messing with forces that are best left alone.

Regardless of how people feel, it seems the space agencies of the world are quite happy with nuclear power. Mainly because they’re already using it and have been since 1970.

The reason being that spacecraft operating towards the outer edges of our solar system can’t get enough power from solar cells. So instead they use radioactive material to power electrical systems.

However, the likes of NASA and the ESA have other ideas.

Deep space exploration has a lot of challenges attached to it that we need to overcome in order to make it a viable human endeavour.

Radiation shielding is a major issue as outer space is awash with background radiation that can prove fatal if exposure reaches high enough levels.

Lack of gravity can also cause bone decalcification and muscle atrophy.

But by far one of the biggest headaches is how to sustain propulsion on deep space missions. Fuel is both heavy and volatile and – as Mark Watney says in the Martian:

NASA hates fire. Because of the whole “fire makes everybody die in space” thing.

NASA has a point.

Fuel also runs out and leaves very little room to manoeuvre if anything goes wrong.

When you think about the challenges involved in just sending humans to the moon, they are increased by an order of magnitude greater the further from Earth you get.

So, using a nuclear propulsion system – that requires little or no fuel – would be both safer and more viable.

According to the ESA, the simplest form of nuclear propulsion would be to pass hydrogen propellant over the core of a standard, if lightweight, nuclear reactor.

The propellant would then leave the reactor through a nozzle much like a standard rocket.

Granted this is still using fuel of sorts but hydrogen is far more efficient, produces far more thrust and – providing we can crack hydrogen collector technology – is abundant in space.

It’s also a far safer alternative to the Cold War-era Orion Drive. Which essentially uses surplus nuclear bombs as a form of forward propulsion. They produce 111 times more thrust than the modern design and the perfect solution providing you don’t mind leaving a radioactive death wake behind you. 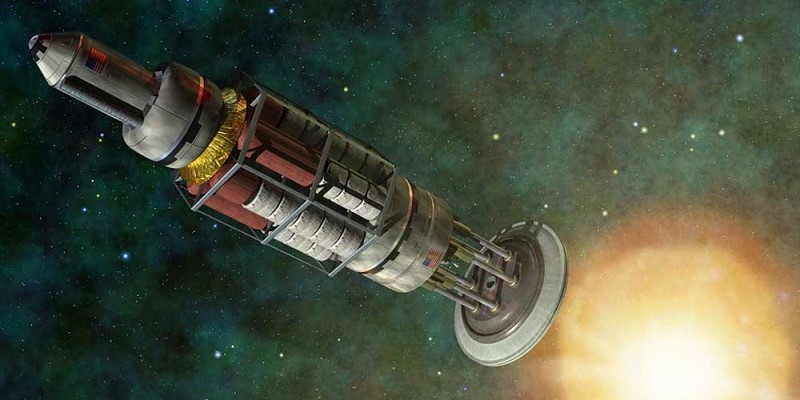 Meanwhile, NASA is developing the Kilopower reactor – a simple and inexpensive reactor that could provide significant amount of power to future spacecraft. Using Stirling engines (circa 1816) that can convert the heat from the reactor into motion – the Kilopower reactor can produce far more energy from its uranium alloy core than a standard RTG.

In addition to the spacecraft's main systems, the Kilopower has enough output to power electronic propulsion systems.

NASA may not like fire, but a reactor breach in space will be just as bad. If not worse. However, there are alternatives being developed too. Including a very Star Wars-esque Ion Drive.

If they don’t call the test Craft a TIE Fighter, they’re just not having enough fun at work.

The X3 ion drive is a Hall-effect thruster. It works by accelerating a propellenat (xenon) by electric and magnetic fields. You can watch a video about the X3 below:

The magnetic field limits electrons' axial motion and then use them to ionize propellant, efficiently accelerating the ions to produce thrust, and neutralize the ions in the plume.

Ion thrusters have been used on satellites for years with great success but currently lack sufficient thrust to deliver crewed missions.

The X3 in its current state of development lacks the required thrust too but it’s also still in a prototype state.

Engineers involved with the project are confident that they can significantly increase the energy output of the prototype in order to make a full scale drive a viable option.

Beyond the X3 there’s not a lot of other options out there. The EM Drive – discovered by accident – is looking increasingly like a dud. Or at least the positive propulsion tests were false positives due to the thermal expansion of the copper cone used.

According to the laws of physics the EM Drive shouldn’t work anyway, but it provided a form of propellant free propulsion that could have transformed the way we ply the void.

It may yet be proven to work – which would be huge – but the likelihood is it won’t.

The best we can hope for – at least for the time being – is a form of propulsion that uses a fuel that is both abundant and efficient.

Cracking the means to harvest gaseous fuels like hydrogen and xenon, from space may be the key for long-distance space exploration – at least in the short term.

Otherwise we’ll be permanently limited by fuel capacity, consumption and a tiny margin for error that could be the difference between success and death by fire. Which would make NASA very unhappy.

KDC Resource are a leading technical recruiter in the space sector. If you need support finding the best talent for your requirements, get in touch with us today.

Or, if you’re looking to boldly go into a new role then register your details.