2022 Will be the Next Step Towards Investigating Life on Mars 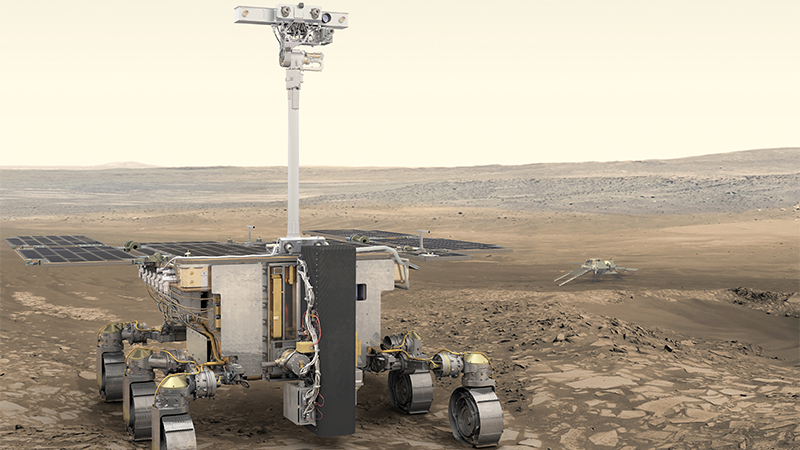 The ExoMars project, run by the ESA and the Roscosmos Space Corporation, is their leading project looking for life on Mars. Although it began in 2001, it has so far only launched once, in 2016.

But, this is all set to change in 2022 with the launch of Rosalind Franklin, ExoMars’s second rover. What changes were made since the first design, and how will it attempt to fulfil the ExoMars mission?

Short for Exobiology on Mars, ExoMars is an astrobiology programme run by the ESA and the Roscosmos Space Corporation. It was initially conceived as part of the ESA’s Aurora Programme before Russia became a full partner in 2013.

Its mission, while not simple, is straightforward. ExoMars plans to look for signs of life on Mars by:

A sample-return mission is one where, unsurprisingly, the craft returns Martian samples to Earth. Currently, rovers test samples on-planet and are restricted by available technology, time, and budget. But, returning the samples to Earth is believed to be one of the most important missions, as it will demonstrate the technology necessary to launch manned flights to Mars.

The first mission launched the Trace Gas Orbiter satellite and a soft-landing module, which unfortunately failed. The orbiter has already proved valuable: it has detected methane in Mars’s atmosphere and helped select an appropriate launch site for the Rosalind Franklin rover.

ExoMars’s rover, the Rosalind Franklin, has been in the works since 2005. Due to numerous setbacks, it had a launch date of 2020. However, the ESA announced early that year that there were further tests needed on its lander mechanisms and flight software. As a result, the launch date was again postponed until 2022.

When it does eventually land on Mars, its data will be invaluable. It is a six-wheel autonomous rover equipped with numerous scientific instruments, along with a two-metre sampling drill.

Its lab suite is known as a Pasteur analytical laboratory that includes an infrared spectrometer, a neutron spectrometer, a close-up imager for studying rocks, x-ray, a laser spectrometer, and an infrared hyperspectral microscope. In short, it contains all the necessary equipment for investigating signs of water and organic molecules in its collected samples. The rover will land at Oxia Planum, a site believed to have contained some body of water.

Construction of the Rosalind Franklin took place at Airbus Defence and Space in Stevenage. In theory, we are now in the final stages of testing and calibration, so hopefully the new launch date will go ahead.

The importance of Mars to human development is becoming clearer than ever. But, if we ever plan to settle the planet, we must first understand more about its history. The only way to do this is with incredible projects like the ExoMars rover. Hopefully, it will discover data that complements existing knowledge about the planet and bring us one step closer to expanding our relationship with Mars.