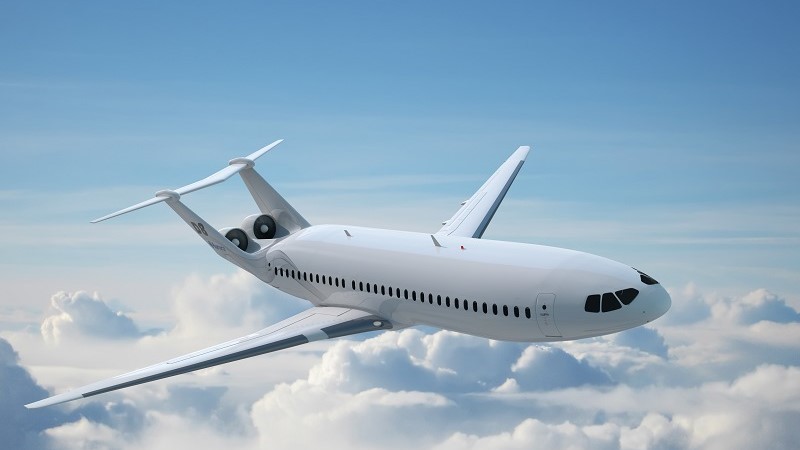 The Flying V – that we wrote about here – is a dramatic design intended to tackle the major issues facing the aerospace industry.

This is especially challenging when you consider that – usually – when you make something bigger, in order to carry more people or cargo, it gets heavier.

Aerospace companies around the world are working hard to devise new aircraft that can meet those needs and fit within the existing infrastructure of airports.

Here are some of our favourites:

You’d be forgiven for thinking Aurora Flight’s D8 is some kind of seafaring creature, or more at home in a cult science fiction franchise set in a galaxy far far away.

The ‘double bubble’ fuselage is quite alien compared to the more traditional craft. However, the wider fuselage allows a smaller, lower drag wing and tail.

Developed in partnership with Massachusetts Institute of Technology (MIT), the D8 has boundary-layer-ingestion (BLI) propulsion. This new technology could reduce fuel burn by 8.5% and works by positioning the engines closer to the fuselage to take in the slower moving boundary-layer of air that flows around the aircraft. Using slower air means the engine doesn’t have to work, allowing a lower fuel burn.

The engines are embedded in the top of the aft fuselage where they ingest the boundary layer and reenergize the wake to reduce drag. But wake-filling propulsion requires distortion-tolerant fans to cope with the turbulent air entering the engines.

The non-circular, dual lobe cabin, will provide a twin-aisle layout but the fuselage cross-section requires a unique composite structure which could make it expensive to produce.

It’s also not clear if Aurora is still developing the craft as NASA’s funding for the project stopped at the end of 2018 and the D8 page has been removed from Aurora’s site.

Whether or not the plane has been scrapped, the design is one worth pursuing.

Onera clearly agrees as their own experimental aircraft – the Nova – is inspired by the D8’s distinctive design. With a more pronounced nose, it has the profile of a mink whale and has a similar wide lifting fuselage and BLI propulsion.

Whereas the D8’s engines are mounted on the aft of the plane, the Nova’s are embedded inside the rear fuselage, with inlets on the sides rather than the top, where they ingest 40% of the fuselage boundary layer.

Unlike the D8 it has downward facing winglets for improved stability and a standard T-tail over the weight reducing pi tail.

The Nautilius concept is almost an evolution of the Nova and the D8. Airbus’ concept is significantly larger with the fuselage narrowing to two stings on which the nacelles are mounted. The intention being is to maximize ingestion of the fuselage boundary layer while minimizing azimuthal distortion of flow into the fans.

Driven by gas turbines or electric motors installed upstream of these propulsors, the fans ingest 100% of the fuselage boundary layer with minimum distortion, maximizing the drag saving.

Airbus have been experimenting with some fairly cutting-edge designs for years. In 2010 they raised eyebrows with a concept with peculiar shaped wings and engines that were fully integrated into the fuselage.

The compartment could also be ejected in the event of critical system failure or hijacking.

It’s unlikely that these features will make it into an aircraft any time soon, however.

Representing the electric future of commercial flight, Wright Electric is developing a 180-seat electric airliner for short routes such as London-Paris.

The distinctive M shaped wing assembly – upon which is mounted arrays of electric fans gives it a distinctive and ‘near-future’ look that will appeal to airlines and passengers alike.

It also sports a V-tail with a third bank of electric fans situated between for additional thrust and boundary layer ingestion to reduce drag.

Wright Electric is working exclusively with budget UK airline EasyJet currently but – if the aircraft is successful – it’s hard to see that exclusivity lasting long. Even if Wright Electric produces a variant for general sale.

The current range of the M-Star sits around 310 miles making it ideal for use across Europe.

EasyJet expects the M-Star to start flying their London to Amsterdam service. As their second busiest route this would make a huge difference in terms of reducing emissions.

What isn’t clear is how long the M-Star would take to recharge and what adverse weather could do to the range.

The Dragon concept – according to Onera – is an answer to the standards imposed by Europe and to meet the challenges associated with fuel consumption and emissions.

By using 20 electric ducted fans under each wing, the Dragon can carry 150 passengers at Mach 0.8. The positioning of the fans along the trailing edge avoids interference with airflow over the wing and increases transonic drag.

The fans are powered by two turbo-generators mounted on the rear fuselage, burning kerosene to generate the electricity needed to power the fans.

This hybrid design would reduce fuel consumption by 25% for an 870-mile flight.

So – if this design could be scaled up – on long-distance flights the fuel, emission and cost reductions would be significant.

It’s reasonable to assume that not all these designs will make it into production. At least not in their current forms.

But, whether it’s the Flying-V, the D8 or the Dragon – or all of them – the next few years could see some incredibly designed aircraft taking to the skies.

If you’re looking for a new role in aerospace upload your CV today or check out our vacancies.

Alternatively, if you’re looking for top technical and engineering talent in the aerospace sector, register your details with us and a member of the team will get in touch.