Aircraft Orders Up 10x in a Year 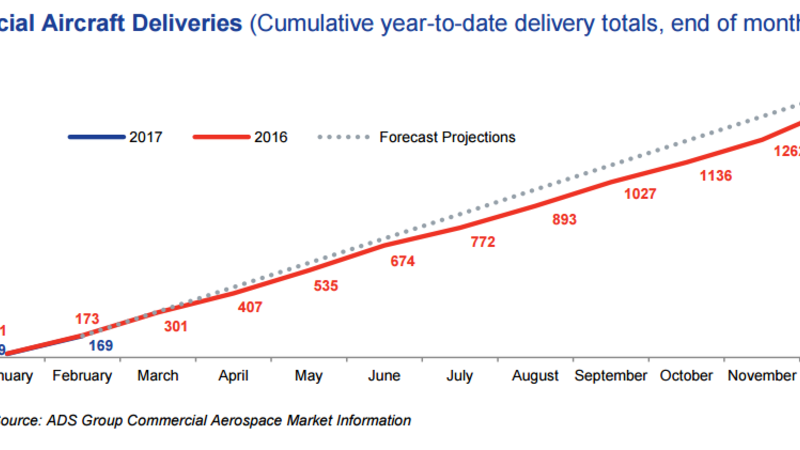 February was a bumper month for the aerospace industry, with 100 aircraft delivered and orders up to 43.  However, Brexit remains the great unknown and may weigh on industry optimism.

Global aircraft orders soared in February, putting the industry on target for a record year of deliveries whilst providing a timely boost to the UK economy.

February 2016 saw only four new aircraft ordered. This figure was smashed by the 43 ordered in February 2017 according to data gathered by ADS.  The data is based on orders from major manufacturers such as Airbus and Boeing and the strong demand was driven by short-haul planes with a single aisle.

100 planes were delivered during the month, down very slightly on the 102 delivered in February 2016.  Overall, 1433 aircraft were produced last year, yet another record year for the industry.  ADS believes that this record-breaking trend will continue, forecasting growth of 6-7% in 2017.

Paul Everitt, Chief Executive of ADS Group, said: “Today’s figures demonstrate continued success for the UK aerospace industry and good prospects for the rest of 2017. The industry is looking to build on 2016’s record year for deliveries, as all major aircraft companies look to increase their production rates.”

UK aerospace is frequently mentioned by politicians as a very important sector for the UK economy and a major success story.  However, Brexit is the huge unknown, generating huge uncertainty that may not be resolved any time soon which could weigh on sentiment and ultimately, orders.

On Brexit, Everitt said “It will be vital for industry and government to work together to secure a good deal, one that gives companies in our sectors the confidence to invest and create more high value jobs in every region of the UK.”