Are Solar Powered Aircraft the Answer to eVTOLs’ Sustainability Questions? 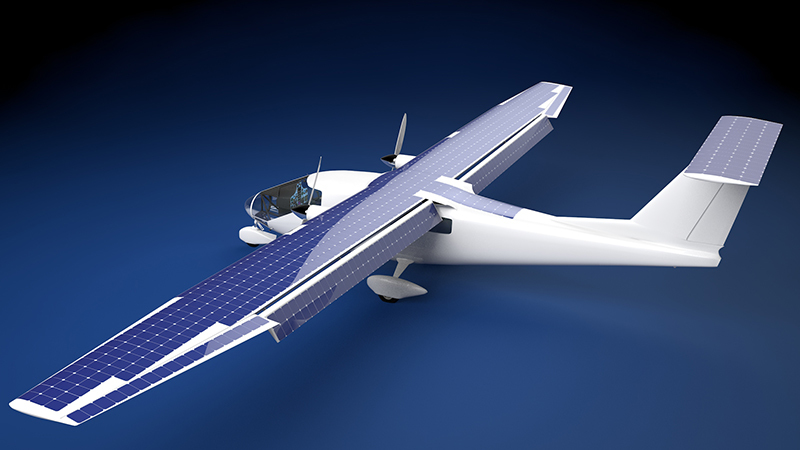 Current eVTOL aircraft theoretically answer concerns about the future of sustainable travel. By replacing road vehicles with electric aircraft, we will hopefully see a massive shift in emissions within the transport sector.

But, all this effort is effectively meaningless if we generate the power using fossil fuels. As we have previously stated about hydrogen fuel, there is no point using green transport if we are still using questionable energy sources.

Are solar powered-aircraft the answer to this problem?

At first glance, the idea of solar-powered aircraft seems like an impossibility. But, advances in solar technology mean panels can be mounted on the wings of aircraft capable of recharging batteries between flights.

One such example is Solar Flight’s 6-seat transport plane. It fits into the small aircraft niche and will operate away from traditional airports and refuelling stations. The wings and tail are massive solar panels to charge the onboard lithium-ion batteries.

Solar Flight has various other projects under its belt that range from unmanned to passenger aircraft. It also has an extensive flight log detailing test flights for its current projects.

Another promising company is Solar Stratos, which is designing a solar-powered plane capable of flying at the edge of space. Its plane has 22 metres squared of solar panels that charge the onboard batteries. The plane is optimised for electric power: its fuselage is carbon-fibre and it has a large wingspan that allows low-speed flight.

Approaching the challenge from a different angle is the Solar Impulse Foundation. Its purpose is to identify, fund, and implement solar power solutions for some of humanity’s biggest challenges. The Clean Aviation challenge runs in partnership with Air France and is currently looking for researchers and proposals to address the future of sustainable air travel.

How Does This Apply to eVTOLs?

As mentioned, one of the biggest concerns with eVTOLs is the source of their energy. We can only consider them to be fully green if this energy comes from renewable sources.

However, solar panels on the aircraft might not be the answer, at least not currently. The biggest issue is the eVTOL’s design. While you might fit solar panels on something like the Lilium Jet, there is nowhere for them on a design like the VoloCopter. After all, the aircraft needs wings so it has the required surface area.

Also, most eVTOLs implement fast charging for quicker turnaround. The Solar Stratos plane’s energy efficiency is 24% using solar panels, which does not translate well to the idea of fast charging.

One solution could be to not fit the solar panels on the aircraft but instead set up recharging stations at the skyports. eVTOLs that do not use fast charging can swap their batteries out between flights. Connecting them to a solar-powered battery charger would combine the best of both technologies.

Perhaps the biggest issue is that eVTOLs balance weight against flight efficiency. Adding solar panels into the mix will make them heavier, meaning they could carry fewer passengers and not travel as far. The battery technology in use is almost at its limit, and this would add another variable into the mix.

The Future of Solar Technology

The Solar Stratos plane makes use of the most advanced solar cell technology available, and this operates at a maximum 24% efficiency. We will need to see massive advancements in solar technology before we see them on eVTOLs.

But, as with most renewable energy technologies, we have seen massive growth in recent years. It was not long ago that solar panels were massive and we could not store their energy. A few more advances in the size and efficiency of solar panels, and we might find they are the answer to eVTOL energy concerns.