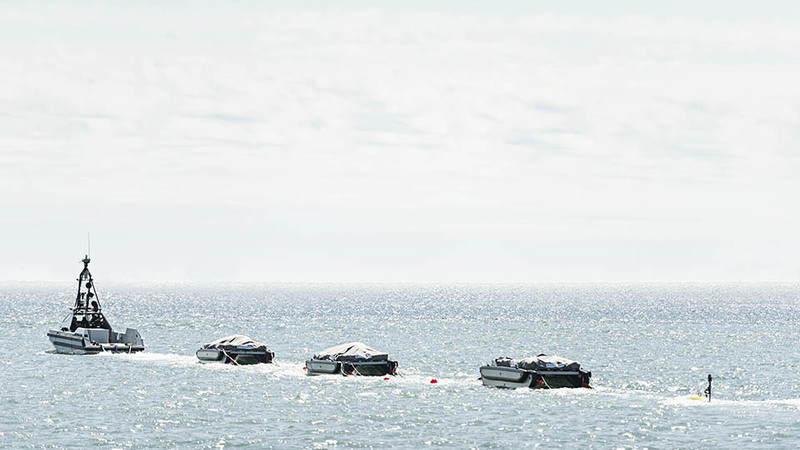 The vessel is made up of three coil auxiliary boats led by a ten tonne unmanned surface vessel.  The auxiliary boats can detonate mines via magnetic, electric and acoustic signals.  These capabilities extend to defeating modern digital sea mines which can detect and target military ships passing above.  A “sense and avoid” feature allows the vessel to work alongside other autonomous systems in order to protect the country’s territorial waters as well as those further afield.

The new minesweeper has been put through a rigorous testing process by Atlas Elektronik, Defence Equipment and Support and the Royal Navy’s Maritime Autonomous Systems Trials Team (MASST).

Defence Minister Guto Bebb said “This autonomous minesweeper takes us a step closer to taking our crews out of danger and allowing us to safely clear sea lanes of explosives, whether that’s supporting trade in global waters and around the British coastline, or protecting our ships and shores. Easily transported by road, sea and air, the high-tech design means a small team could put the system to use within hours of it arriving in theatre. We are investing millions in innovative technology now, to support our military of the future.”

Brigadier Jim Morris Royal Marines - Assistant Chief of the Naval Staff in Maritime Capability, and Senior Responsible Officer for the Mine Counter Measures and Hydrographic Capability (MHC) programme said “This autonomous sweep system represents a fundamental step in the Navy’s transition to autonomous offboard systems to counter the threat posed to international shipping by the sea mine; we look forward to commencing demonstration of the associated minehunting system in 2019.” 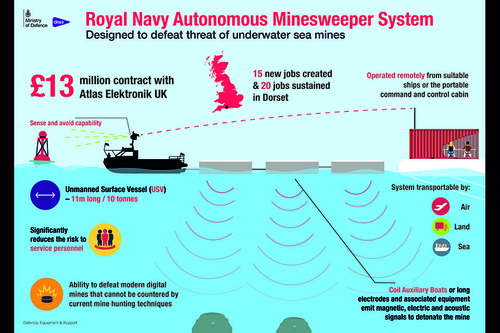 Autonomous defence projects are a big focus for militaries around the world and it is good to see the Royal Navy embracing new technologies.