Boeing Pushes Bombardier into the Arms of Airbus 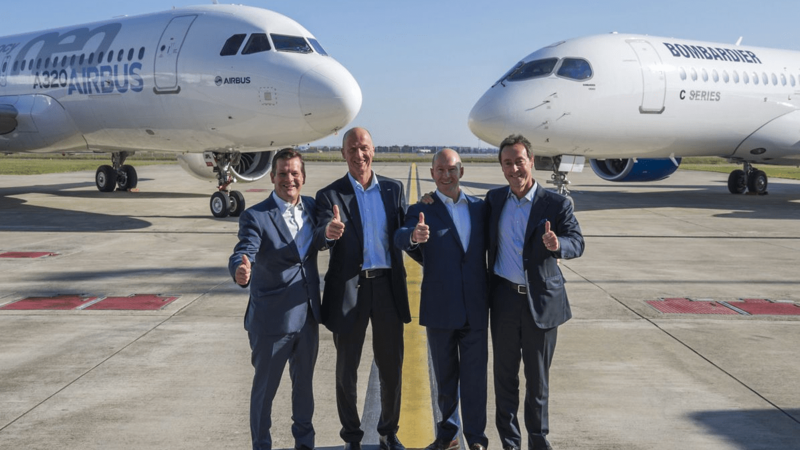 Airbus and Bombardier have announced that they will become partners on the Bombardier C Series programme, perhaps the biggest industry shake-up in a generation.

Airbus commands over half of the global single-aisle jet market but only around 25% in the US.  Although Bombardier’s C Series is smaller than both Airbus and arch rival Boeing’s models it has cutting-edge fuel efficiency that customers love.

With Boeing feeling threatened, Washington slapped a 300% tariff on Bombardier at Boeing’s behest, alleging state aid and dumping of C Series jets in the US market.  Such tariffs were an existential threat to Bombardier which helped to push it into the arms of Airbus.

Airbus has capitalised on this turmoil by taking a 50.01% in the C Series programme with 31% held by Bombardier and 19% held by the Quebec government’s investment arm.  Whilst Airbus will pay no cash for the deal, its global sales and supply chain expertise could cut costs and increase sales considerably.

Airbus in particular has done very well out of the deal.  It now owns one of the most efficient and modern single-aisle planes, has access to the technology that underpins it for its own next generation single-aisle plane and it also cements its place as the narrowbody leader.  And all for no cash at all.

Bombardier, struggling with slow sales and a comparatively weak balance sheet, gets to live another day and has a shot at good upside for the C Series programme.

Airbus will assemble the C Series at its plant in Alabama, a strongly red state, using many American components that it hopes will exclude it from import duties.  In the legal and political wrangling that will no doubt follow, Republicans may also be compelled to support the C Series due to the manufacturing jobs provided by the Mobile plant.

Bombardier CEO Alain Bellemare said “Combining the C Series with Airbus’s global scale creates a remarkable business, and together we will take the C Series program to new heights,” he said in a conference call.

The partnership could double the value of the C Series programme.

“It brings certainty to the future of the program so it increases the level of confidence that the aircraft is there to stay, which means that we will increase volume.”

Tom Enders, Airbus chief executive, said the partnership is a “win-win for everybody.”

“Our partnership will accelerate the commercial success and it will ensure that the program comes into a position to realize its full potential.”