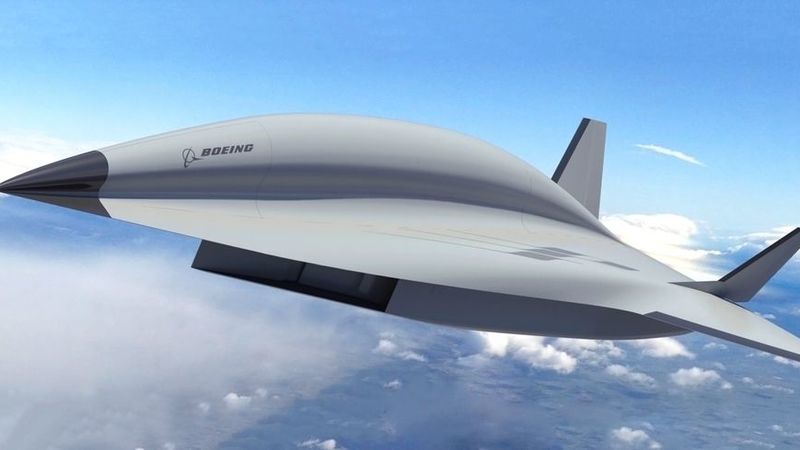 At the recent SciTech forum at the American Institute of Aeronautics and Astronautics in Orlando, Boeing unveiled a model of its new hypersonic concept that could eventually replace the SR-71 Blackbird.

The SR-71 was a long range reconnaissance aircraft that was able to reach Mach 3.  It was retired in 1999 without an immediate replacement until Lockheed Martin announced the imaginatively named SR-72 in 2013.  However, the race is very much on to produce and deploy a true sucessor.

Boeing's proposal has a stated goal of mach 5 and the design uses a twin-tailed, waverider configuration which the company claims is an evolving yet feasible hypersonic design.  It also includes elements of a turbine and dual ramjet/scramjet.  According to Aviation Week, Boeing "envisions a two-step process beginning with flight tests of an F-16-sized, single-engine proof-of-concept precursor vehicle leading to a twin-engine, full-scale operational vehicle with about the same dimensions as the 107-ft.-long SR-71."

There is a noticeable trend towards hypersonic research and development in the US.  Boeing has already trialled the X-43 and X-51 unmanned hypersonic planes which they hope to build on with this new design.  The X-51 did not take off and land under its own steam - rather it was dropped from a B-52 during a test flight before accelerating to Mach 5.1 and then pitching into the sea.

Lockheed Martin is planning to test their hypersonic jet, the next-generation SR-71, in 2020.   According to Rob Weiss, EVP and GM of Lockheed Martin’s Advanced Development Programs: “We’ve been saying hypersonics is two years away for the last 20 years but all I can say is the technology is mature and we, along with DARPA and the services, are working hard to get that capability into the hands of our warfighters as soon as possible.”

Whilst it is stating the obvious, deploying hypersonics would give the US an even greater edge in military capability. That means that the incentives and the political will are there to develop such an aircraft and we should watch this space for serious advancements over the next decade.