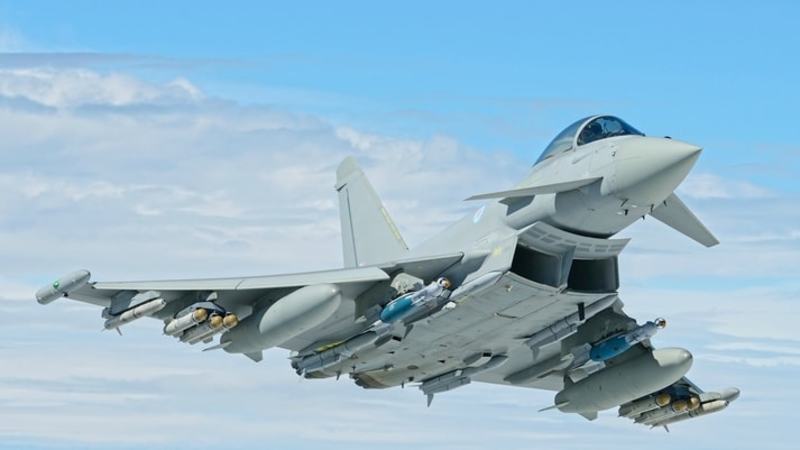 The Brimstone air-to-surface missile has completed a live test firing from a Eurofighter Typhoon for the first time.  The trial is part of the Phase 3 Enhancement (P3E) series of Typhoon upgrades which will see significant improvements to both sensor and mission systems.  The Brimstone is developed by MBDA.

The goal of the test was to check the separation of the Brimstone missile once released and is part of nine planned test firings that will expand launch and range capabilities.  This first missile test follows 40 test flights that took place earlier in 2017 in conjunction with the Royal Air Force.

Volker Paltzo, CEO for Eurofighter Jagdflugzeug GmbH, said: “The successful completion of this trial is an important step towards integration of the weapon on to the aircraft. Brimstone will provide the Typhoon pilot with the ability to precisely attack fast-moving targets at range, further enhancing the aircraft’s already highly potent air-to-surface capabilities.”

Andy Flynn, BAE Systems Eurofighter Capability Delivery Director, added: “Through the dedicated work of our teams, and with support from our partners, we have been able to reach this milestone in a short space of time. We will now continue to work alongside the Royal Air Force and our partner companies in a joint approach to ensure we successfully deliver this package of enhancements into service.”

Andy Bradford, MBDA Director of Typhoon Integration, said: “This first firing is a major milestone for both the Brimstone and Typhoon programmes. Together Brimstone and Typhoon will provide the Royal Air Force and other Eurofighter nations with a world-beating strike capability to beyond 2040.