Hybrid Aircraft to be Developed by Airbus, Rolls-Royce and Siemens 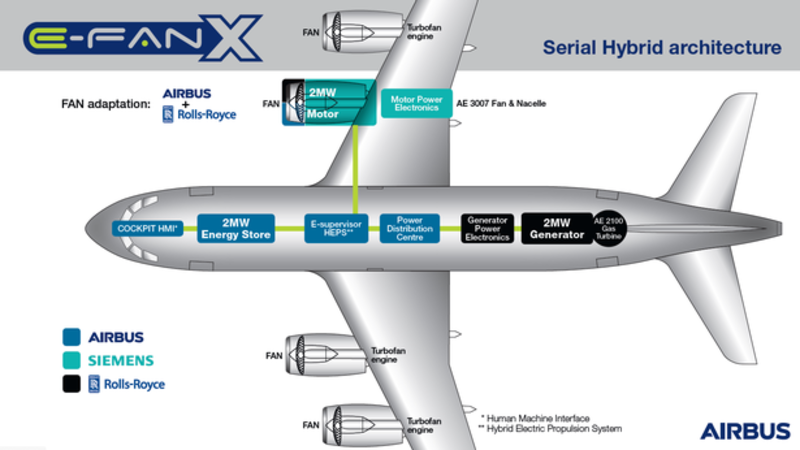 The demonstrator, known as the E-Fan X, is scheduled to fly in 2020 after ground tests on a BAe 146.  The BAe 146 will have one of the aircraft’s four conventional Honeywell turbofan engines swapped out for a 2MW electric motor and fan and an additional Rolls Royce AE2100 gas turbine will be installed in the rear fuselage to power a 2MW electrical generator.  A second electric motor could be added if results are good.

“The E-Fan X is an important next step in our goal of making electric flight a reality in the foreseeable future. The lessons we learned from a long history of electric flight demonstrators, starting with the Cri-Cri, including the e-Genius, E-Star, and culminating most recently with the E-Fan 1.2, as well as the fruits of the E-Aircraft Systems House collaboration with Siemens, will pave the way to a hybrid single-aisle commercial aircraft that is safe, efficient, and cost-effective,” said Paul Eremenko, chief technology officer at Airbus. “We see hybrid-electric propulsion as a compelling technology for the future of aviation.”

The E-Fan programme will see Airbus take charge of the control architecture of the propulsion system, batteries and flight control integration. Rolls-Royce will oversee the turbo-shaft engine, the 2MW generator and the power electronics in addition to joint work with Airbus on fan adaptation. Siemens will supply the motors themselves as well as the power electronic control unit, the inverter, the DC/DC converter and the power distribution system.

For Airbus, this is part of an organisation-wide focus on electric and hybrid travel. Just like its hybrid car cousins, a hybrid-electric jet should optimise power generation throughout all phases of flight but particularly during take-off and climb with both gas turbine and batteries working together.  This should result in sizeable fuel savings.

The other obvious potential benefit is the reduction of noise in the take-off  and climb phase which currently blocks traffic at nighttime due to noise concerns.  If there are proven advances in this area, it could lead to much less noisy takeoffs and landings which could allow operations around the clock.

This is an example of Airbus aiming to speed up the pace of innovation by flying, testing and iterating as fast as possible in the same way that Silicon Valley tech companies do.  SpaceX has pioneered such processes in the space industry to great fanfare.  Interestingly, Paul Eremenko, the architect of such modern innovation practices at Airbus as CTO has actually announced his decision to leave Airbus and join United Technologies Corporation as SVP and Chief Technology Officer.  He cited the fact that the travel was difficult as he was working in the US for a European headquartered company.  He will now “optimise for happiness” with his role at US-based UTC.