Is AI the new Weapon of Mass Destruction? 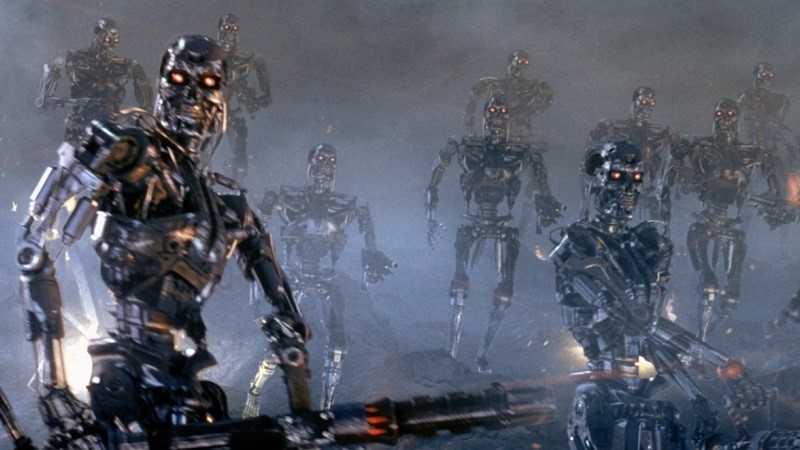 ​Anyone who remembers the 1983 classic Wargames will know the perils of handing over control of a nuclear arsenal to a supercomputer.

The infamous strapline ‘would you like to play a game?’ highlights how detached machines are from the life or death decisions that they may be involved in making.

For a machine, it’s a binary decision. To launch or not. It’s not a death toll, it’s a series of calculations to create the projection of a number.

In fact, most movies involving advanced AI (with the exception of Star Wars and Star Trek) tend to conclude that the best thing for the future of the world is for humanity to be controlled or disposed of.

The Matrix, the Terminator franchise, iRobot and Avengers: Age of Ultron are just a small cross-section of Hollywood titles that spell the end of humanity at the hands of its own creations.

World ending robots and supercomputers aside, the growing sophistication of Artificial Intelligence poses both a great opportunity and a grave threat to our day to day lives.

In 1993, George Luger and William Stubblefield defined Artificial Intelligence as

“the branch of Computer Science that is concerned with the automation of intelligent behaviour”.

Jump forward almost 3 decades and we can find Artificial Intelligence in almost every facet of our lives. Google and Facebook both uses AI extensively in their operations.

Alexa and Google Assistant are in millions of homes, fielding queries ranging from the weather forecast to how old is Tom Cruise (56 years old at the time of writing). Although this is technically machine learning rather than specifically AI.

That may be unnerving to some but when you consider how long we’ve been using AI, and the general lack of robot uprisings, it can’t be all bad.

Of course, this isn’t entirely true. The rising sophistication resulted in Facebook shutting down two of its AI computers as they had started to converse in their own language.

Although there is much debate over how much control we have over the AI already active in our lives. There is uncertainty over the algorithms behind devices like the Amazon Echo and the Google Assistant are designed and how they serve content or answer queries.

Without adequate oversight, the general population are becoming comfortable with technology that can’t be trusted.

Elon Musk was quoted as saying:

“AI is the greatest risk we face as a civilization.”

This may seem odd considering Elon Muk’s Tesla Inc. pioneered the autopilot and effectively ushered in the age of the self-driving car. Not to mention Space X’s reusable rockets that can land themselves.

But presumably, Musk’s stance comes from a concern of what could happen if these machines are left to their own devices. Or fall into the wrong hands.

Criminals are always the first to adopt new technology. They were early adopters of mobile telephony, the internet, cryptocurrency and now they are starting to buy into AI.

When you live under the constant threat of arrest or murder by rivals, the risk of trying a technology that proves to be a dead-end is of little concern. Whatever it takes to stay ahead of competitors and the law.

However, for the first time ever, AI enables cybercriminals to mobilise in a way no one thought possible. It allows them to take the fight to anyone and anywhere world – even law enforcement – in an organised, globe-spanning network.

In order to overcome security measures, accessing the files or financial records you wanted and getting out without leaving a trace took genuine skill.

Now AI allows anyone to prosecute a cybercrime wave, using highly targeted automated tools that learn as they go.

Compounded by reports that the countries like the UK are both under spending and underprepared to deal with cyber threats, and its little wonder that the number of cyber-attacks is expected to rise significantly in 2019 alone.

SMEs are usually the most vulnerable, as they lack the budget or in-house skills to put necessary protections in place.  However, AI-powered crypto-viruses and other malware can ruin any sized organisation as they can be targeted and get better at inflicting harm with each deployment.

The other side of this coin is businesses or governments using the same tactics in order to steal information, gain a competitive edge or – if they’re feeling malicious – cripple their target entirely.

But whoever is pushing the button, the result is the same. Sustained attacks on infrastructure, businesses or government bodies can bring a country to its knees far more than any war or weapon of mass destruction ever could.

Turning off the lights, shutting off the water and disabling a government’s means of communicating with its people is the kind of nightmare scenario they make TV shows about.

It would be nothing short of devastating.

The good news is that not all AI is being used to steal from or destabilise organisations and nations.

There’s something perverse about pitting a machine against a machine in a fight for dominance but it’s the situation we find ourselves in. At least until such time as there’s incentive or deterrent strong enough to convince cyber-criminals to pack up and move on.

Advanced Threat Protection is designed to offer adaptive protection against cyber-threats. Specifically, against attacks coming from other artificial intelligence.

2019 will see ATP become mainstream with more and more businesses adopting it as their networks face increasingly sophisticated attacks. A crucial part of an ATPs success is effective sandboxing. The best products now watch the activity at the processor instruction level, detecting and blocking malware (including zero-day events) before it is deployed.

However, in order to fully protect your network and systems, moving to the cloud is really your only choice.

Local security solutions can’t effectively defend an entire network. Microbusinesses and companies of one maybe, but nothing bigger.

The cloud also allows businesses to centralise data and build a consistent defence around it. Especially if sandboxing and ATP is being used.

Machine learning allows the system to make predictions and mitigate threats in real-time which further strengthens the entire system.

To be clear, commercial license virus protection isn’t obsolete. Yet. But that time is coming, and the effectiveness of ATP and sandboxing will supersede it altogether.

In practice, there’s going to be a great many small businesses that will be nervous about moving their systems onto the cloud. The idea of relinquishing control won’t sit terribly well. It’s understandable but the potential damage of a cyber attack would be far worse than any anxiety caused by moving your data offsite.

The only way this gets better is to embrace the innovations that are being created to help us. Elon Musk and others like him may have a point about AI. It is already being used to steal money, cryptocurrency and information.

AI has already demonstrated the capacity to learn and adapt beyond its programming. Humans also have a terrible habit of taking a good idea and figuring out how we can use it to kill people.

However, for every Terminator there is a Sarah Connor and for every organised crime network there are people working hard to bring them to justice. So while I may not always get it right when it comes to AI, it remains to be seen whether or not it’ll be the architect of our own demise.

KDC Resource are dedicated technical and engineering recruiters with a specialist focus on cyber security and artificial intelligence in the emerging technology sector. If you’re looking for a new role register your CV with us today.

Or if you’re in need of top talent, get in touch and a member of the team will contact you to discuss your requirements.