Is AirCar a New Major Player in the eVTOL Race? 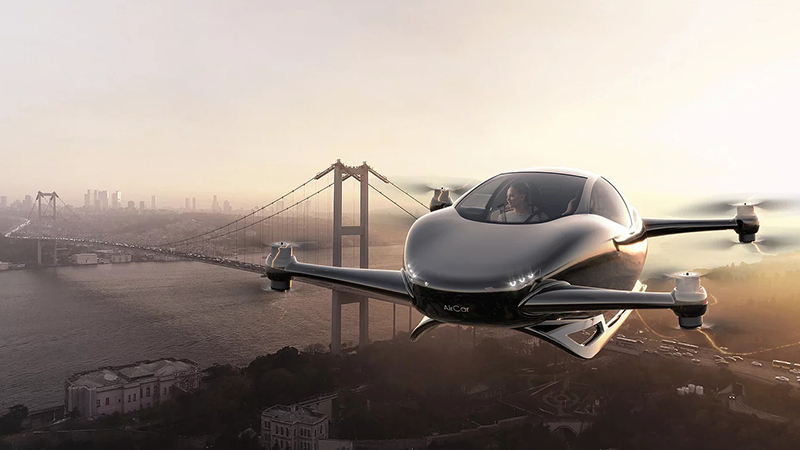 In the race to produce the first commercial eVTOL, much of the industry’s focus has been on companies like Volocopter and Lilium. But, Turkey-based AirCar has steadily been carving out a slightly different niche: the consumer market.

So, how will AirCar compare to other eVTOLs, and what sets it apart?

AirCar Corp is a Turkish company specialising in autonomous, fully-owned intercity eVTOLs. Unlike Lilium and Volocopter (among others), which focus on the air taxi market, AirCar’s product is for the home consumer.

As a result, it is much smaller and noticeably less expensive. Of course, initial releases will still be pricey for the average consumer, but they will become cheaper as the technology improves.

The AirCar is for two passengers to a maximum payload of 500kg. Its battery-powered electric motors run eight propellers and can be charged to 80 per cent capacity in 15 minutes.

Unlike air taxi eVTOLs, AirCar’s range is up to 128km. However, this is because it is designed as an inter-city commuting vehicle, so is more than enough for this purpose.

But, like other eVTOLs currently breaking into the market, AirCar is fully autonomous. It uses machine learning, lidar, radar, and other machine sensory outputs to plot its flight paths without ground control communication. This will make it suitable for the average commuter, as there is no need to hold a pilot’s licence (unlike other flying car designs).

As mentioned, AirCar’s niche is the home consumer market. It is designed for people living in urban/suburban areas commuting to the city for work. This is why it falls into a much lower price bracket – roughly the same as a luxury car.

Also, its compact design makes it ideal for smaller spaces, such as driveways and workplace car parks. The AirCar measures 4.5m in length, the same as a standard SUV. Having the ability to park an aircraft in a normal parking space will make this much more accessible to the masses.

The vehicle’s safety features and autonomous software make it suitable for everyday consumers, too. It will have day-one autonomy with no internal controls. While this might put some people off, the system includes numerous redundancies and a ballistic parachute. Such redundancies include multiple engines and propellers and an automatic emergency landing protocol.

Breaking into the Market

AirCar Corp has already conducted more than 1,000 test flights with its prototype models. In 2021, it began testing its full-scale model and software in real-world settings. This is a major step towards certification, which it has initiated with the Federal Aviation Administration.

While there is no official launch date for the AirCar, it is not far behind other eVTOL companies in terms of testing and production. Therefore, we will likely see it rolled out within the next few years.

It will be exciting to see how its launch plays out in the wider eVTOL market. After all, the fully-owned eVTOL niche is currently less crowded than the air taxi sector, meaning there will arguably be less competition for dominance. That said, a lot can change in the coming years.