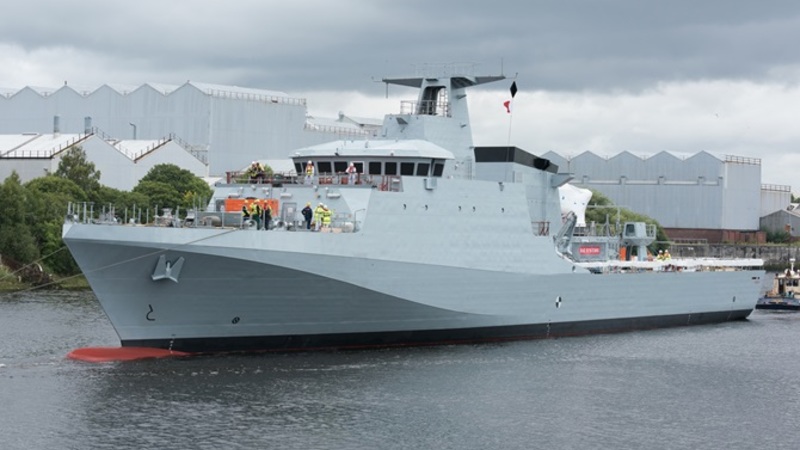 HMS Forth, one of five cutting edge warships commissioned by the Royal Navy to upgrade the fleet, has left Scotsoun after spending 11 months there being fitted out. The patrol ship has sailed down the River Clyde for the first time and is soon scheduled to begin sea trials.

Forth is the first of five ships in its Batch 2 River class offshore patrol vessel, and updates the existing Batch 1.  Each ship in the class will carry a 30mm main gun, two miniguns, four machine guns, two Pacifica 24 boats and a flight deck.  This new format means that the Batch 1 and Batch 2 are from the same family but have a very different design.

HMS Forth’s Commanding Officer, Commander Bob Laverty, said "Today marks a key moment in the generation of the ship and it is extremely exciting to be on board.  Forth boasts state-of-the-art equipment, and my Ship's Company are looking forward to developing their knowledge of the systems on board with their industry counterparts."

Lt Tom Sleight, Forth's Navigator, commented that "The design provides a lot more operational flexibility with the large flight deck and space for the embarked force."

"These ships will be able to conduct all of the fishery protection and domestic security duties currently undertaken by the squadron but will now also provide far more capable platform for deploying overseas such as when Mersey provided support to migrant operations in the Mediterranean or Severn and Mersey on Atlantic Patrol North."

"They are going to be extremely capable ships when compared with their predecessors."