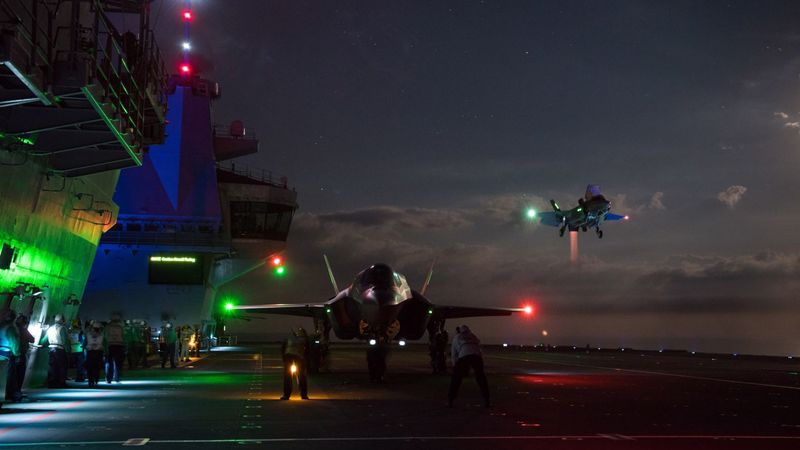 The Queen Elizabeth is currently conducting flight tests with the F-35s near to the US east coast.  The night trials in particular have been very impressive, with state of the art night-vision technology and trained aircraft handlers allowing the aircraft to safely touchdown.  In addition, night trials were undertaken without night vision in order to ready the aircraft’s ability to land in more challenging conditions.

Ten years in the making, these sorties are the result of a concerted UK effort to bring an aircraft carrier back into the UK fleet.  She can support up to 36 of the supersonic Lightning IIs, allowing her to seriously project her power.

Defence Secretary Gavin Williamson said “The largest warship in British history is joining forces with the most advanced fighter jets on the planet. This marks a rebirth of our power to strike decisively from the seas anywhere in the world.

“The historic first landing on the deck of HMS Queen Elizabeth is a monumental moment in our country’s proud military history. It is also a statement of Britain’s determination to promote peace and prevent war.”

Commander James Blackmore, Commander Air on the aircraft carrier said “The concept of night flying isn’t difficult for us - what we are looking at is what the new lights on board HMS Queen Elizabeth look like at night from the perspective of the F-35s.

“We’ve already done that with the rotary wing aircraft earlier this year, but now it’s crucial that we understand how suitable they are for the F-35s to operate at night from the carrier. First indications are that they are in good order for both the aided and unaided perspectives.”