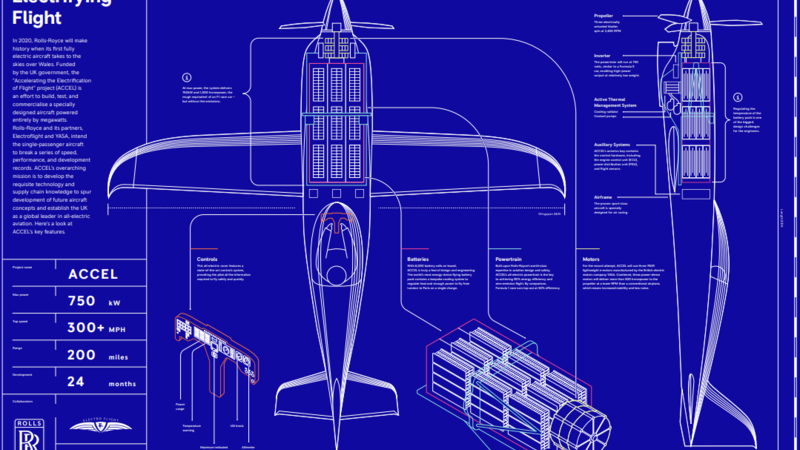 Rolls-Royce is leading a consortium of UK companies aiming to develop a fully electric aircraft capable of achieving speeds of over 300mph.  2020 has been pencilled in as a target flight date where it aims to smash the current electric speed record of 213mph which would firmly position the project and the UK as world leaders in electric aviation.

The single-seater aircraft is part of the Accelerating the Electrification of Flight (ACCEL) programme, made up of Rolls Royce, electric motor and control specialist YASA, and Electroflight, a fledgling aviation company with a specialism in electric flight.  Partly funded by the UK government, the project has made Gloucestershire Airport its home in a boost for the aerospace industry in the south west.

ACCEL claims to have put together the most energy-dense battery pack ever assembled, with over 6000 tightly-packed cells producing power whilst being aided by an advanced cooling system. YASA is supplying the three 750R lightweight electric motors used in the plane which will continuously deliver more than 500 horsepower during the record attempt. Coupled with ACCEL’s all-electric powertrain that will run at 750 volts and 90% energy efficiency, the project is seemingly in a good place to achieve its ambitious plans.

Matheu Parr, ACCEL Project Manager for Rolls-Royce, said "This plane will be powered by a state-of-the-art electrical system and the most powerful battery ever built for flight. In the year ahead, we’re going to demonstrate its abilities in demanding test environments before going for gold in 2020 from a landing strip on the Welsh coastline."