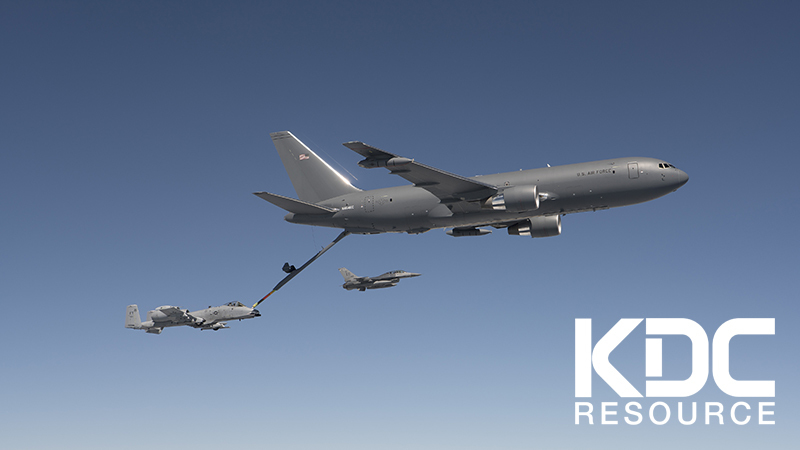 Air-to-air refuelling presents many advantages for aircraft, particularly in a military context. It allows military aircraft to carry greater payloads, fly greater distances, and even have a shorter take-off distance.

Among the various methods used is probe-and-drogue, which offers the simplest in terms of manufacture and operation. The Boeing KC-46 is one of the most recent models that entered operation in the US Air Force in 2019. But what makes it more advanced than previous versions, and will it be utilised by other air forces around the world?

The KC-46 project began all the way back in 2001 when the US Air Force made plans to replace its fleet of KC-135E Stratotankers. The Boeing 767 commercial airliner was selected as the basis for the new refuelling plane, and was modified into the KC-46 Pegasus.

After several delays, the project saw its first test flight in 2015. The first KC-46 joined the US Air Force in 2019, which began the phased introduction of 100 planes by the mid-2020s. Boeing, of course, have led development, but UK firm Cobham Aerospace are a major subcontractor on the project.

As mentioned, the KC-46 is a modified version of Boeing’s 767 commercial airliner. It has the same fuselage, wings, and flight deck, and is powered by two Pratt & Whitney PW4062 engines. Depending on the plane’s purpose, there are various iterations of the rear cargo deck for either cargo or medical transportation. Under each wing are fuelling pods, and the drogue system is located under the rear fuselage.

Cobham’s various contributions include the all-important refuelling pods and drogue system. Both have a flow rate of more than 400 gallons per minute and are equipped with a 75ft refuelling hose. Although based on designs currently in use, Cobham have upgraded the electronic architecture to produce the most reliable and efficient system available. Comparatively speaking, the system provides a lightweight and fast setup equipped with BIT detection and fault isolation.

Cobham also provides various parts of emergency oxygen management equipment. They produce the oxygen pressure reducer, cutoff valve, and oxygen regulators, all of which are vital components for both standard operation and emergency situations.

Another key contribution to the KC-46 is the fuel tank inerting air separation module. This is designed to pump nitrogen-rich gas into the fuel tanks to reduce flammability and the chance of explosion. Similarly, the system also monitors oxygen levels in the air leaving the module, which further improves passenger safety and ensures incidences of tank explosion are minimal.

Finally, Cobham contributes to the antenna and communications systems. The company produces the slotted array antenna that makes up the weather monitoring system, and the tuneable antenna and logic conversion unit. These units are designed to give high performance over a wide bandwidth to ensure plane-to-plane and plane-to-ground communication is always possible.

Of course, the KC-46 is primarily used by the US Air Force. In January 2021, Boeing was awarded a $1.7 billion contract for 12 more KC-46s. Also, the Japanese and Israeli air forces have orders for 4 and 8 planes respectively. Bids have also been put forward to the Canadian and Indian air forces, although the results have yet to be announced.

The Boeing KC-46 promises to offer faster refuelling times and greater versatility than previous probe-and-drogue refuelling systems. Cobham’s contribution to the aircraft is invaluable, and it is good to see British aerospace engineering involved in such a high-value project. Whether the RAF considers it in their next bid, however, remains to be seen.