The History of VTOL 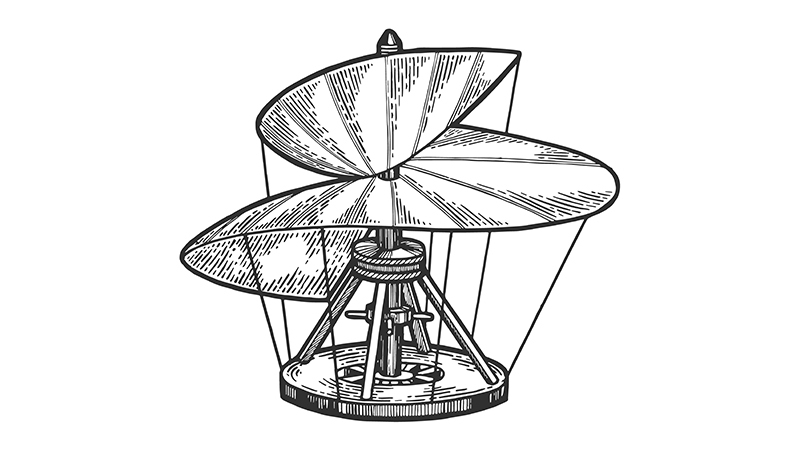 Our current focus on the booming eVTOL market would be nothing without the historic VTOL aircraft that came before them. We all know the helicopter as a VTOL, but the history involves much more than that.

Looking back at the history of VTOL is the only way to see how far we have come in such a short space of time. So, let us take a look back at a few centuries worth of vertical flight.

A Quick History of VTOL

The first evidence we have for a vertical take-off and landing aircraft is in Leonardo da Vinci’s sketchbooks. Dubbed the Aerial Screw, it was a human-powered helicopter that theoretically would work.

Nothing much happened in the next 400 years until the first primitive helicopters flew in 1907. Between then and the post-WW2 era, numerous designs appeared, including Henry Berliner’s horizontal rotor fixed-wing and Nikola Tesla’s 1928 patent.

In the early 1950s, American companies Lockheed and Convair won contracts to develop vertical lift fighters. They both succeeded in designing and testing aircraft, but the contracts were later cancelled. After WW2, attention largely turned to the use of jet engines and tilt wings.

It resulted in helicopters as we know them today, but also aircraft such as the CL-84, V-22 Osprey, and of course the Harrier Jump Jet. It also spawned numerous variations in the base VTOL rotor design, such as gyrocopters, gyrodynes, and much more. Then, we enter more recent history and find the eVTOL vehicles we all know so well. While their engines might be electric, they still rely on the same principles of vertical lift that have informed the last century of development.

Of course, we can also count rockets as VTOL aircraft, but they deserve their own attention.

Within the three main categories, we can break it down further into rotorcraft and powered lift. Rotorcraft include helicopters, cyclogyro, and gyrodyne, which require rotors to provide vertical and horizontal thrust.

Powered lift, however, refers to aircraft that take off vertically but then have fixed wings for horizontal movement. They do not require runways but otherwise provide the same performance you would find in a standard aircraft. It includes tail-sitters, convertiplanes, and vectored-thrust aircraft.

Modern unmanned drones largely fall into the rotorcraft VTOL category, particularly designs that rely on the quadcopter setup. However, eVTOLs used as air taxis, such as Volocopter and Lilium Jet vary between powered lift and rotorcraft designs. While all provide vertical lift, they have different ways of managing horizontal flight.

What is Next for VTOLs?

The near future of VTOLs should be obvious to us all. In the coming years, we will see a boom in eVTOL air taxis, logistics vehicles, and more. The technology exists, and the market is ready for the revolution it will bring. Alongside this, we will see helicopters continue as the dominant standard VTOL.

But what does the distant future hold for VTOL aircraft? It is impossible to say. We have seen such massive leaps in such a small time that VTOL design in a hundred years is almost unimaginable. As VTOL technology improves, so too does the limit of its possibilities.