The Importance of Earth Observation in the Polar Regions 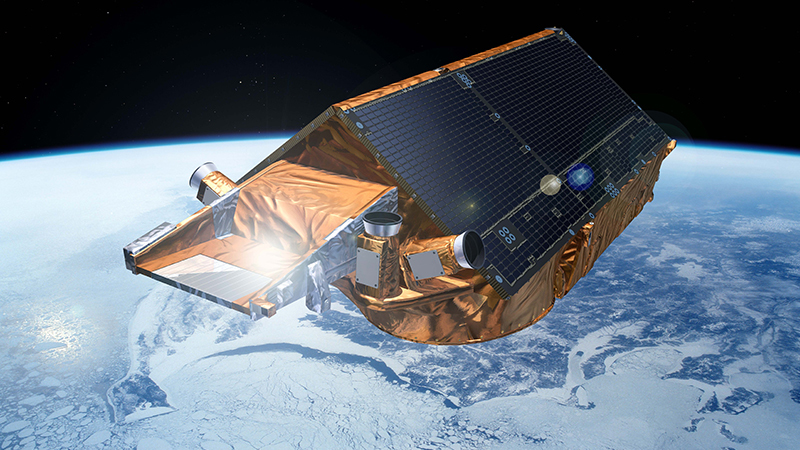 The role of satellites in understanding our planet is more important than ever. Earth observation helps us with everything from carbon sequestration plans to climate change mapping.

A prime example of this in action is the CryoSat mission, of which the UK is part. Understanding the mission and its goals highlights the importance of satellites for Earth observation, particularly in the Polar Regions.

CryoSat is a low-Earth orbit satellite for measuring ice thickness in the cryosphere, the technical term for frozen water in the Earth’s water system, particularly in the Polar Regions.

The satellite uses a synthetic aperture radar (SAR)/interferometric radar altimeter (SIRAL) to monitor changes in ice thickness around Greenland and Antarctica. Its two onboard radars help it build a 3D picture of ice sheets, including height and thickness, measured to the nearest centimetre.

Monitoring the thickness of ice sheets provides valuable data about the impact on rising sea levels. It can differentiate between short-term or seasonal variations and long-term trends, allowing specialists to better understand the precarious situation of climate change.

While this is CryoSat’s primary mission, it serves other purposes. Its design allows it to map undersea topography and current interactions, including Polar tides and currents. This information is not directly related to ice sheet behaviour but is vital for understanding oceanic changes.

CryoSat launched in April 2010 after launch problems with the first satellite. Although its mission was originally meant to last three years, it is still in operation more than a decade after its launch. The ESA provides regular updates, and CryoSat’s mission data is open-source.

As a member of the ESA, the UK has been involved in the mission since its inception. British physicist Professor Duncan Wingham proposed the idea in 1998 and went on to become the first Director of the Centre for Polar Observation and Modelling.

UK companies assisted with the development and construction of the satellite, and private and public entities use its data for climate mapping. Involved in construction were Marotta UK, AEA, and SciSys UK Ltd. They assisted with the satellite’s battery and onboard application software, among other areas. The UK’s involvement in satellite development and production is well known, so there is no surprise that it was instrumental in building this important satellite.

The Importance of CryoSat

As an observation mission, CryoSat might be one of the most instrumental in understanding and mapping future climate change. While it is not the only Polar observation satellite, it is the most wide-reaching. Compared to other altimeters, which observe roughly 70 per cent of total sea ice, Cryosat observes 95 per cent.

Also, due to its altitude and inclination, it will remain this way for years to come. Changes to Polar sea levels mean many altimeters will lose areas of observation, whereas CryoSat will remain at 95 per cent observation.

Its data already helps us conceptualise coastal sea-level rise and glacier ice loss, to name a few topics. These might be difficult topics, but having this data is vital if we are to plan for future changes to our planet.

The Future of Earth Observation

CryoSat’s mission will only become more important as we understand sea level rises in more detail. Mapping future changes using its data is fundamental for planning preventative or reactionary measures.

While its original mission was only meant to be three years, its sophisticated design will keep it going for many years to come. Hopefully, by the time it fulfils its mission, we will have enough information to prevent further sea level rises.