The Moon Landings and the Future of Space Exploration 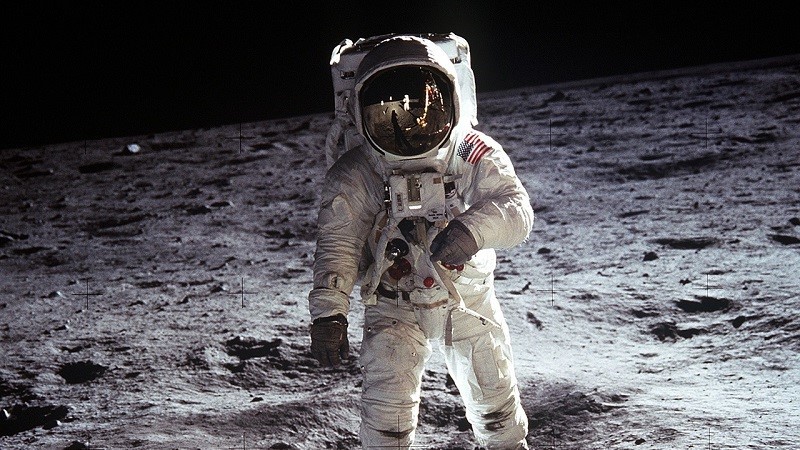 In 1961 President John F Kennedy delivered a speech that would change the world. He challenged Congress and NASA to put a man on the moon. Within the decade.

This was a monumental task but only because thus far the US had barely begun its forays into space but because the technology didn’t exist yet to achieve it.

Some felt that it was both a distraction from the Bay of Pigs debacle and a response to the Soviet Union’s successful Luna 2 mission in September 1959.

Democracy and capitalism had taken a pounding and America needed a win.

Regardless of the motivation, Kennedy had thrown down the gauntlet and dared NASA to say it couldn’t be done.

Moreover, he was challenging Russia to beat them to the punch. Tensions between the US and Russia were reaching critical mass. Kennedy’s announcement came a little over a year before the Cuban Missile crisis.

One can’t help but wonder if Kennedy knew the path this challenge would set humanity on. Or whether he could imagine the innovations it would inspire.

The space race had been in full flow for 6 years by the time Kennedy made his announcement. Russia had already but the first satellite and first human into space. Despite the United State’s best efforts to get their first.

Landing a man on the moon and the ultimately successful Apollo 11 mission would represent its peak. The interim years represented an incredible acceleration by both nations both in terms of expenditure and technological innovation.

Throughout the 60s NASA made incredible leaps. Project Gemini had succeeded in putting humans into low Earth orbit (roughly 1200 miles from Earth) and bringing them back again.

Sending men to the moon was a journey of 238,855 miles – roughly 200 times the distance. And then NASA had to bring them back again.

It was made more complicated by the fact that the flight path was terrifyingly narrow making the margin for error non-existant.

The challenges NASA faced at the time were incredible. In the 60s computers were both so vast and so dim-witted that mounting them into the command module was both impossible and pointless.

That meant new technology. Integrated circuits were invented to be used in the Apollo Guidance Computer. Although an incredible innovation at the time, by today’s standards the average engine management system in modern cars has more processing power.

But that was just one of the headaches facing the NASA scientists.

They had to create a rocket powerful enough to get three astronauts to the moon. They also had to create a lander that could get down to the surface and get safely back up again.

And then safely navigate them home with – relatively speaking – a whisper of fuel in the tank.

Then they had to make sure there was enough fuel, air and supplies to maximise the chances of mission success.

The answer was the Saturn V rocket. At 363ft, the Saturn V was as tall as a 30-storey building. With each of its five primary F-1 engines measuring 19ft tall. Even the nozzle extensions were big - 12.3ft at the widest point. They could also produce 7.5 million pounds of thrust.

They burned more fuel in 1 second than Lindbergh used to cross the Atlantic in the Spirit of St Louis.

But size isn’t the only thing that makes the Saturn 5 rockets awe inspiring. They are the most complicated creations in human history. Each of the 15 rockets had 3 million components each.

For the technology of the time, NASA achieved something truly remarkable. Especially when consider this predated the digital age.

After Apollo 8 and 10 successfully orbited the moon and returned safely, on 16th July 1969, Apollo 11 launched charged with landing on the moon. 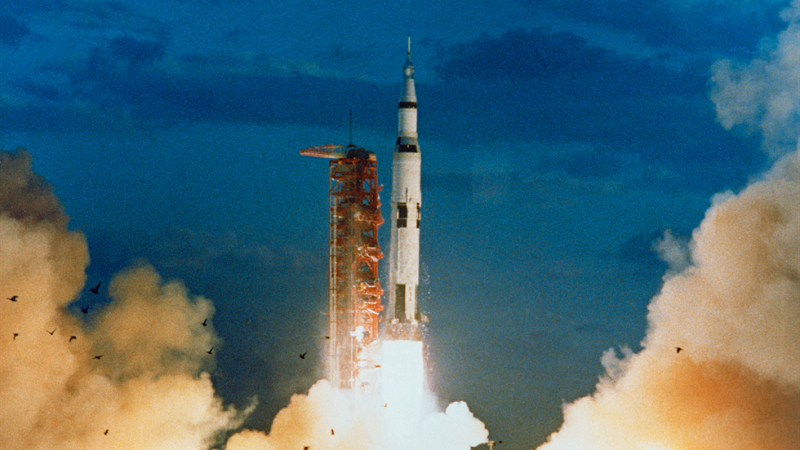 One small step for man…

It’s hard to fathom what it must be like to be launched into space. With the most powerful engines ever devised at your back.

Let alone knowing that there is absolutely no hope of recovery if something goes wrong.

That’s before you address the monumental responsibility of landing on the moon.

After 3 days of travel, Apollo 11 made it into Lunar orbit. Apollo’s 8 and 10 had gotten this far already, the challenge was safely piloting the Eagle (landing craft) down to the surface.

However, Armstrong and Aldrin had two problems. Their descent was too fast and the landing site the landing computer had chosen was a boulder-strewn death trap.

Armstrong took control of Eagle and brought the craft down as quickly as possible. The faster descent and additional time wasted looking for an alternative landing zone left the Eagle with just 25 seconds of fuel left.

Here men from the planet Earth first set foot upon the Moon, July 1969 A.D. We came in peace for all mankind.

At 2:56 am, Neil Armstrong stepped off the 9-rung ladder of the Eagle Lander and uttered the immortal words:

That’s one small step for a man, one giant leap for mankind.

And the world was never the same again.

After an EVA lasting just over two hours and 21.5 hours on the surface, Armstrong and Aldrin returned to the Columbia command module in Lunar Orbit.

After Apollo 11’s successful return home there would be 6 more Apollo missions to the moon. All but the ill-fated Apollo 13 making successful landing and return runs.

Although a number of other missions were planned, Apollo 17 would prove to be the last. NASA was under pressure to deliver Skylab and the Apollo-Soyuz Test Project.

There simply wasn’t the time or funding to justify any more missions to the moon. Plus there was a general feeling that the box had been ticked and the public was losing interest.

But America was changing.

The Vietnam War was coming to an end and Nixon was about to be scandalised into resigning the Presidency.

Since the Apollo missions humanity’s manned missions have stayed relatively local. Establishing and expanding the International Space Station has occupied our attention since 1998.

Some questioned the value of building a space station over further manned exploration. However, the lessons we have learned about the long-term effects of living in space have been invaluable.

Studies into human biology in micro gravities, interplanetary contamination and medicines have all given us vital information for the survivability of a crew on a long-term mission.

It has provided the groundwork needed for the next phase of manned exploration, whether that was intended or not.

Had NASA launched a manned mission to Mars in the 70s there’s every chance it would have failed simply because the crew would have wasted away. That information simply wasn’t available 40 years ago.

When the Space Shuttles were grounded in 2011 many believed that the 30-year programme was the end of American space exploration. For a while that was true.

In the years since crew for the international space station have been ferried up by Russian built Soyuz rockets.

However, it could once again be an American made rocket taking Expedition 61 into orbit.

SpaceX has been a partner to NASA for years, ferrying supplies to the ISS. Using its Falcon 9 rockets and Dragon cargo capsules, SpaceX has been instrumental in changing the landscape of space exploration.

NASA sees the value in outsourcing the astronomical cost of fleet building and maintenance to external businesses, allowing them to focus on science.

SpaceX has been praised for their innovation in developing reusable rockets that can return to Earth on their own.

This dramatically reduces the cost of sending supplies or crew into space.

The successful test of the Crew Dragon capsule signals the impending return of America to the stars.

Doubly so now Boeing is producing the CST-100 Starliner and likely its own rockets too.

However, what happens next is far more significant.

SpaceX is working on its next rocket – the Super Heavy (formally BFR) and the simply named Starship.

The plan is to send a manned mission to Mars – an objective Elon Musk has been working towards since he founded SpaceX in 2002.

In the meantime, SpaceX will be taking fashion innovator and globally recognized art curator Yusaku Maezawa on a private Lunar mission to help fund the development of the Super Heavy.

This deepens the debate surrounding the interpretation of the 1967 Outer Space Treaty (or Treaty on Principles Governing the Activities of States in the Exploration and Use of Outer Space, including the Moon and Other Celestial Bodies to use its full name).

In a nutshell the treaty says that space (or anything in it) cannot be claimed by any nation. This is to prevent land grabs and wars. Which makes complete sense.

It also states that all activity in space should be peaceful in nature and for the benefit of all countries.

This is all fine and good, but the 52-year-old treaty didn’t consider private businesses. When space flight was in its infancy no one could have predicted the likes of SpaceX and Boeing would be able to build a fleet of rockets.

But the commercialisation of space has its benefits. Astroscale are working to clear the skies of space junk. All 128.9 million pieces of it.

Companies like Telespazio and Thales Alenia are working with the ESA and Russian Space Agency to develop the ExoMars. A probe that will land on the surface of the Red Planet and deploy an autonomous rover.

Much like NASA’s InSight, the ExoMars will be testing the geochemical and geophysical aspects of Mars and identifying any risks to future human missions.

Considering a manned mission to Mars is very likely within the next decade, the ExoMars mission is vital to its success.

Kennedy’s assassination in 1963 was tragic for a lot of reasons not least of all because he didn’t live to see his ambition to put a man on the moon realised.

His challenge to the scientific community of the 1960s would spark every generation after to explore the stars in new and exciting ways.

24 people – as many people as have been people to the moon – were killed in the name of space exploration. This doesn’t include those killed in planes during training.

But despite their deaths, we now know more about the galaxy than ever before. We have seen stars being formed in interstellar nurseries. We have recorded the very fabric of the universe wobble.

And we’ve spent 15 years learning about how we cope in outer space so we can better explore it when the opportunity arises.

We’re a long way from artificial gravity, warp drive and phasers but if science fiction has taught us anything, it’s that we have to start somewhere. And sometimes the journey is the worthier part.

We’re proud to work with several space contractors around the world. If you operate in the space sector and have requirements, then contact us today to speak to a member of the team.

If you’re looking for your next role in the space sector, register your details and check out our latest vacancies.

Alternatively if you have any questions about how we support you in your search get in touch and we’ll be happy to help.