The Passing Storm - The Tornado Retires from Service 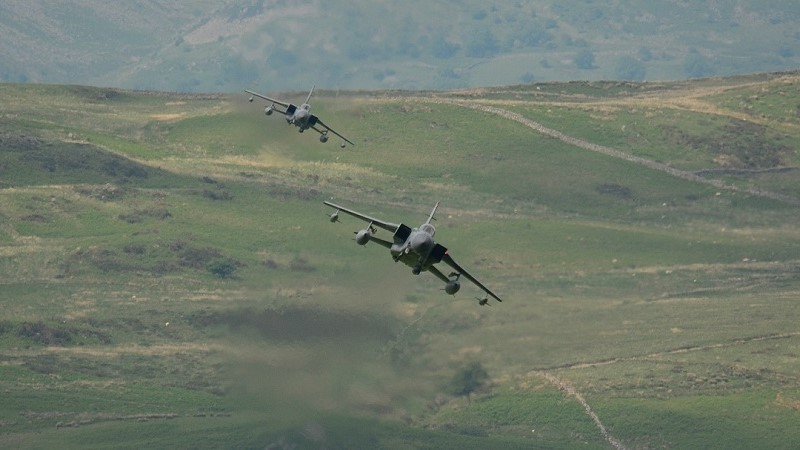 The end of March marks the official retirement of the RAF’s fleet of Panavia Tornado multirole fighters.

It’s a bitter sweet moment for the Royal Air Force and the country as the Tornado has protected the UK’s airspace, and carried out air operations around the world for 40 years.

The recently upgraded ‘Centurion’ Eurofighter Typhoon will take over the bulk of the Tornado’s multirole responsibilities – backed by the freshly delivered F-35B joint strike fighter.

Conceived during the Cold War, the Tornado was developed by the UK, Italy and West Germany as a first strike deterrent should the war ever ‘go hot’.

With variable sweep-wing capability and a distinctive angular design, it was an imposing sight both on the ground and in the air.

The demands on the Tornado’s design were significant. It had to be a close-in brawler, capable of despatching MiGs either at range or in dogfights. It also needed to serve as a rapid reaction aircraft to intercept Russian bombers and deliver punishing strikes to ground targets.

The sweep-wing design kept drag to a minimum allowing the Tornado to close with ground targets at blistering speeds.

It was even designed to take off on short or even damaged runways. This was an aircraft designed for a world in a state of all-out war.

But the war never came, and the ice thawed.

The final iteration of the Tornado - the GR.Mk4 (or GR4) could carry an impressive array of weapons including the indomitable Paveway guided bomb and the precision Brimstone.

It's the Tornado's armament versatility and impressive payload capacity that has kept the plane a vital part of the RAF's fleet for so long.

With a top speed of Mach 1.3 the Tornado was a Cold War speed freak but is heavily outpaced by most modern jets, with the Eurofight topping Mach 2.

The variable sweep-wing (or variable geometry), allowed the Tornado to serve in almost any conditions.

By moving the wing forward, the Tornado could take off on short runways, making it ideal in active combat zones or taking off from improved airfields.

The variable geometry also gave it improved manoeuvrability while still giving it the benefit of straight-line speed.

Considering the Tornado's long history of air to ground operations, this configuration served it well. It did come at a cost of a much heavier airframe, however. Unfortunately, advances in aerodynamics, engines and more sophisticated computer systems made variable geometry obsolete relatively quickly.

By the time it was pressed in to active service in the 90s the nature of war had changed, making low-level bombing runs it had been designed for too risky.

However, with upgraded systems, the Tornado became one of the world’s most formidable mid-level bombers.

Combat History and beyond

Despite the world’s worst fears, the Cold War ended, and the RAF never had to put the Tornado’s full combat capabilities to the test in its early years of service.

It’s first taste of combat didn’t occur until the Gulf War in 1991. Sixty aircraft were deployed, the majority of which were tasked with crippling the Iraqi military’s capacity to make war.

The Tornados targeted and destroyed everything from airfield to ammo dumps making it impossible for the Iraqi forces to maintain a sustained response to coalition action, let alone mount counter offensives.

Amongst the deployment were a handful of Tornado F3s that – with their long-range missiles – kept the Iraqi air force at a distance.

The Iraqi pilots were aware of the Tornado’s equipment and armaments so they would actively break off rather than engage.

Unfortunately, 6 Tornados were shot down during the Gulf during low-altitude bombing runs. The low altitude made it impossible for the pilots to correct against incoming ground fire.

However, the RAF destroyed 75% of its assigned targets.

The Tornado continued to serve with distinction throughout the nineties and into the 21st Century serving in Bosnia, Kosovo, Iraq, Libya and Yemen.

Its service life was extended briefly to support action against ISIS strongholds in Iraq.

There are many that question the need to retire the Tornado after such a distinguished military career.

Despite its distinguished combat performance, the Tornado wasn’t perfect.

It was far less manoeuvrable than its Western contemporaries. In training exercises RAF pilots had to get increasingly creative in order to engage with and defeat the superior F14 and F/A18s.

Although a testament to the British pilots, the Tornado was falling behind.

It’s comparatively poor range, increasing maintenance costs, and aging design meant that the Tornado, despite its many uses, was an analogue solution in a digital age.

Even innovations in engine design had rendered its distinctive variable sweep-wing design obsolete.

Despite this, most experts hold the Tornado in very high regard. Its recent action in Iraq and Syria, bombing ISIS targets proof that it still has a valuable place within the RAF.

But there is no denying that every piece of hardware has its expiry date and the Tornado is no exception. Plus, budget constraints have forced the RAFs hand.

They simply can’t afford to maintain three frontline aircraft types. Especially when the both the Centurion Eurofighter and the F35B can shoulder those roles comfortably between them.

The Tornado won’t be gone from the world’s skies as the German air force will continue to use the aircraft until 2025, alongside its other aircraft. Four wings of Tornados are currently active in the German military.

Italy too will continue to use the Tornado, gradually phasing it out in favour of the F35 Lightning.

The Tornado was – in many ways – the spiritual forebear of the Eurofighter, being the result of a multinational effort itself.

Similarly, the F35 Lightning II was a huge undertaking by governments and private contractors from around the world. Arguably making the Tornado a grandfather too.

And it’s the curse of all parents to be superseded by their children and the Tornado is no exception. It was very much a plane of its time.

The successor of the Avro Vulcan and Blackburn Buccaneer, the Tornado was designed to fight in a large-scale conflict.

It was designed to deal with fortified Russian installations, dug in troop positions and scare off Russian bombers.

It was also designed with a flawed tactic in mind. The Gulf War proved that low-level bombing runs were highly dangerous and costly. During prolonged combat casualty rates would be unsustainable.

Had the Tornado been deployed against the Russians in this way, the result would likely have been the same.

Although Russia is once again a growing threat in Europe it remains to be seen if we will slip into yet another Cold War. The unpredictable nature of the US/Russian relations certainly doesn’t help ease tensions.

Regardless the fourth and fifth generation of fighters has taken aerial combat so far beyond the Tornado that it can rest easy that we’re in safe hands.

Of course, that Eurofighter and the F35 haven’t been without their issues. When the first Eurofighter rolled off the production line it lacked the required power to take off with a full payload.

The F35 was plagued with problems and ran over time and over budget to somewhere in the region of $163 billion. There comes a point when the sums of money become so vast, they cease to have all meaning and it just becomes about getting the project over the line.

In 2015 there was the glitch in the software that controls the radar. The glitch would cause phantom returns, warning pilots they were surrounded by enemies, when in fact the skies were clear.

According to reports, the glitch meant the radar had to be rebooted every four hours. Risky in a combat situation.

Despite the setbacks, the F35B has been certified combat-ready alongside the upgraded ‘Centurion’ Eurofighter Typhoon.

Problems aside, both fighters are formidable weapons of war, fulfilling differing roles in defending the UK.

In fact, recent operational trials suggest that the two aircraft complement each other very well. The Centurion’s improved payload coupled with the F35’s stealth technology and next-generation sensors makes for a lethal combination.

The RAF is one of the few air forces in the world with the capacity to exploit fourth and fifth-generation aircraft in a combat scenario.

The Tornado has served the nation with distinction for forty years and while it's sad to see it go, we should take comfort in the fact that many of the systems developed for the GR4 found a home in the Eurofighter.

And without the Tornado proving multinational co-operation was possible, it’s unlikely that the Eurofighter and the F35 would have ever gotten off the ground.

KDC Resource are proud to work with several contractors working on the next generation of defensive technologies.

If you’re looking for your next challenge submit your CV or view our latest vacancies.

Alternatively, if you’re looking for leading engineering talent for your defence projects then we can help. Contact us today and a member of the team will be in touch to discuss your requirements.