Variations in eVTOL Design and How this Affects Performance 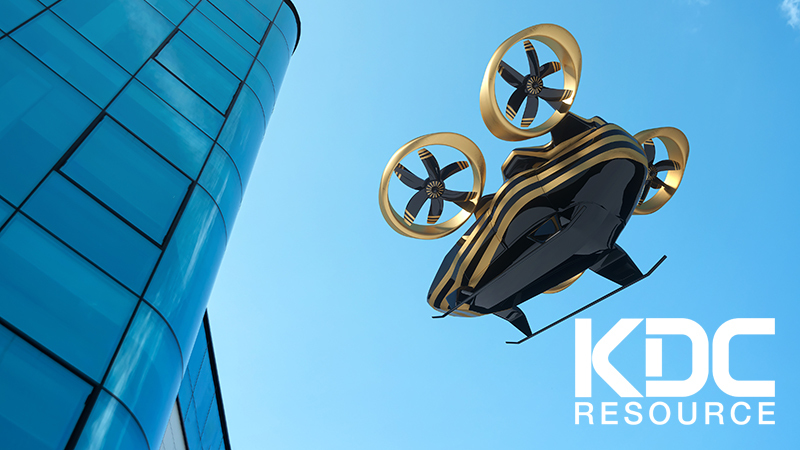 With so many companies focusing their development efforts on eVTOLs, it is hardly surprising that there are several different designs. As the technology is still effectively in its early stages, it is also beneficial for the industry to test different models to see what works best.

But as we approach the rollout stage of eVTOLS, it will be interesting to see how these setups slot into the wider market, with some being more applicable in certain scenarios than others.

We have decided to look a bit deeper into the different designs of eVTOL to understand what exactly they are designed to do and how this might affect their application.

Currently, there are three major models of eVTOL in development, although different companies for a range of purposes have adapted these.

A multicopter is perhaps the most standard and easily recognisable model of eVTOL. As the name suggests, it uses multiple rotors to power the vehicle’s vertical lift and horizontal movement. This is effectively the kind of design you will see on a range of commercial drone models.

A multicopter can use its variable rotors to yaw by speeding them up and slowing them down in different patterns. It achieves horizontal movement by changing the vehicle’s direction of lean and increasing thrust.

Multicopters are arguably the simplest design (comparatively speaking) and can be scaled up to suit the size and application of the eVTOL under consideration.

Volocopter is perhaps one of the best examples of a multicopter eVTOL. Their Volocity – a commercial air taxi – will use 18 rotors, each with a diameter of 2.3m. It will have an overall airspeed of 70mph and a range of 21 miles.

A quadcopter is the most basic form of multicopter; it has four rotors. It is the most commonly used UAV design because of its small size and light weight make it a cost-effective option.

Ducted quadcopters are a design that has been floating around for a while, but they have some limitations. Including ducts around the rotors improves forward motion but hinders vertical static lift. However, ducted rotors would offer less disturbance in airflow, making them more suitable for windy situations. This is one application that might prove useful in the future.

Quadcopters are perhaps one of the earliest designs of eVTOL. In fact, Bristol-based Vertical Aerospace used ducted quadcopters as their first concept vehicle. Since then, though, they have switched to alternative models that are more efficient and offer greater control and manoeuvrability.

One company that is sticking with the ducted quadcopter model is CityAirbus. Their eVTOL has eight rotors arranged in a quadcopter design for improved vertical lift and speed.

The final major model of eVTOL is the fixed-wing. This looks more like a traditional plane but has variable rotors for static vertical takeoff. The benefit of this kind of model is that it offers the aerodynamic properties of an aeroplane with the vertical manoeuvrability of a helicopter.

A prime example of a fixed-wing eVTOL is Vertical Aerospace’s VA-1X. The company switched from the multicopter design to a fixed-wing model because it provides greater range and efficiency. In fact, the company claims this model can fly 100 miles at 150mph, meaning it could fly from Canary Wharf to Heathrow in less than 20 minutes.

However, the biggest difference with the VA-1X is that a human operates it. Unlike the multicopter models above, the VA-1X includes room for a passenger. This is perhaps because it is a more complex model that requires actual piloting, but it also means the company does not have to focus on AI R&D.

Another major player in the fixed-wing eVTOL market is the Lilium Jet. This differs from the VA-1X because it uses 36 ducted fan engines. Importantly, this improves efficiency while also allowing it to tackle longer range flights with a larger payload and lower noise footprint.

Which Model Will Work Best?

Of course, each model will have benefits in certain applications and will be quicker and easier to develop into a commercial vehicle.

Fixed-wing eVTOLs, for example, have a greater range because they are more aerodynamic. The benefit of including wings is the same for traditional aircraft: they reduce drag and mean the vehicle expends less energy travelling horizontally.

However, the addition of wings reduces their flexibility in smaller spaces. The VA-1X has a wingspan of nearly 15 metres and is nearly 13 metres long. While it is capable of longer journeys, it clearly will not function well in an urban mobility setting.

On the other hand, a multicopter design has the benefit of smaller size and greater flexibility in confined spaces, but at the expense of range. This type of eVTOL is more likely to fill the urban taxi niche, and companies like Volocopter are already offering their designs. It already claims it will fly athletes into the Olympic Village during the 2024 Olympic Games.

Then there is the debate between open and ducted rotor systems. While ducted rotors offer greater efficiency due to the lack of tip vortices, they sacrifice a level of responsiveness between control and execution. Therefore, open rotors are more responsive but slightly less efficient due to the extra energy needed to offset interference.

The main difference in multicopter models' applications will likely be dependent on the areas in which they are used. As mentioned, ducted rotors are more effective in windy situations, making them more applicable around skyscrapers or in cities that experience greater weather variation.

In short, though, multicopters and fixed-wing eVTOLs will not be in direct competition with each other. Their applications will depend mainly on the customer’s needs and the setting in which they are used. For example, the Volocopter model will be better for inner-city, short-range transportation, while the Lilium Jet will be suitable for city-to-city and longer distance flights.

We will likely see competition between multicopter models, but again this will largely depend on the consumer's needs. Ducted rotor eVTOLs will likely be smoother, quieter, and more luxurious. In contrast, an open rotor model will be slightly rougher around the edges but cheaper and more suitable for everyday use.

How Will This Impact R&D?

Of course, R&D is a major factor in the release of commercial eVTOLs. Models that use open rotors will be cheaper and easier to get into the market faster and generate more noise. This may impact their adoption in cities, where noise levels will be a key selling point.

Similarly, certification will be an important point when it comes to development. Rotor safety will be a factor, particularly for unmanned models, as there will not be a pilot to appropriately direct customers.

Failsafe systems are a key area of research and certification. While something like a fixed-wing has a better setup for an emergency landing, multicopters need built-in failsafe procedures if a rotor goes down. The Volocity, for example, contains various redundant systems to ensure passenger safety is maintained, even in emergencies.

Novel models, such as the Lilium Jet, will take longer in the development stage. Their approach to using ducted fan engines on a fixed-wing model is uncommon in the industry and will take longer to design and present its own certification challenges. However, the delay to market is offset by its novel approach, meaning there is unlikely to be significant competition for their particular niche.

What Makes a Successful eVTOL?

Along with the overall model and rotor design, manufacturers must consider several important areas when making a successful product. These depend on the specific market being targeted, of course, but remain fairly consistent throughout.

Cost is always one of the most important considerations when designing a commercial product. More expensive designs must recuperate their costs from somewhere, inevitably the consumer. It takes longer for the technology to drop in price, which can impact commercial adoption.

Multicopter open rotor models are arguably the least expensive option, and Uber is looking at the cost of $700 per flight hour as economical for their multicopter models. While fixed-wing models are more expensive to develop, their application in longer flights will likely reduce their overall cost for the consumer.

For any vehicle, distance is another key factor. Manufacturers will need the greatest distance possible, which at the moment is largely dependent on rotor configuration—the capacity of current lithium-ion batteries limits eVTOL in terms of their energy density.

Again, this is dependent on the vehicle’s application. eVTOLs designed for inner-city transportation will not need as much range as ones designed for city-to-city flight. However, maximising range will also reduce the need for charging, which impacts the cost of flight hours.

Charging is the final consideration for the successful production of eVTOL. Quick charging is the most obvious solution, but this obviously limits the number of times a vehicle can be used in a defined period.

Models such as the Volocity feature removable batteries. This massively improves productivity because the batteries can be charged while not in use. It also improves battery lifespan because they can be maintained while the vehicle is in use.

eVTOLs will require novel charging solutions, though. Not only will this mean new battery models with greater capacity and longer lifespans, but we will also need to consider shorter charging times and energy capture from renewable sources. Charging offers a significant barrier to the wider rollout of eVTOL.

eVTOLs are already a massive industry, and they have yet to be commercially adopted. The market’s current variation is only set to increase, particularly as companies confirm the most effective designs for different applications. However, what this variation means in terms of competitive advantage remains to be seen.