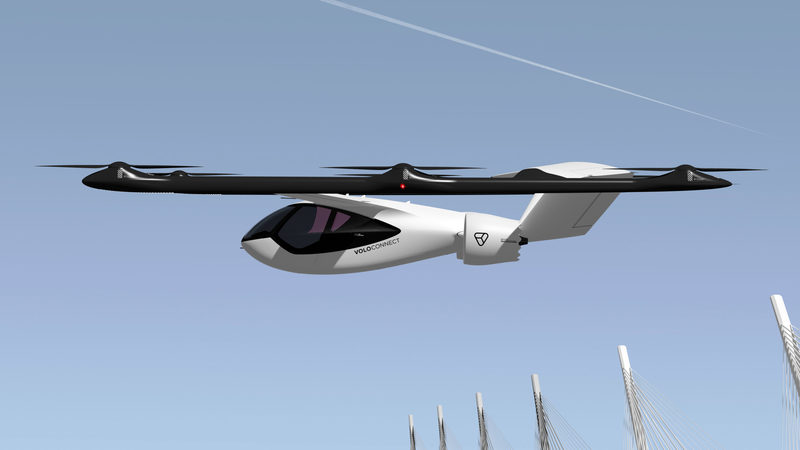 Until recently, much of Volocopter’s efforts have focused on short-range urban mobility. But this is all set to change with the announcement of its latest aircraft, the VoloConnect. How does this differ from its previous eVTOLs, and what does this mean for the company?

What is the VoloConnect?

VoloConnect is still an eVTOL, but it uses a fixed-wing model. It features two propulsion fans and six electrically powered rotors. Its hybrid lift and propulsion system is suitable for areas with fewer space restrictions, such as suburban areas.

Unlike VoloCity, which has two seats, VoloConnect will be capable of carrying four passengers. It will have a range of 100km, a travel speed of 180km/h, and a maximum speed of 250km/h. VoloConnect will run on the same Azure architecture as Volocopter’s other aircraft, meaning route and vehicle management will be much easier and smoother.

VoloConnect is the company’s first fixed-wing eVTOL. Its VoloCity and VoloDrone use a multirotor setup, but its new design is similar to eVTOL aircraft such as the Lilium Jet, which is also for medium-to-long-range travel. The fixed-wing model is an obvious choice for longer flights because of its higher lift-to-drag ratio. This allows for more efficient flight, whereas a multirotor system is better suited to short-range journeys in urban areas.

Aside from the changes to the lift and propulsion system, Volocopter utilises much of its technology from other designs. For example, the system includes multiple redundancies and separations for safety, a battery-swap system, and integration into the wider VoloIQ system.

Differences Between VoloConnect and VoloCity

The differences between VoloConnect and VoloCity come from their different functions. VoloCity has a range of 35km and a maximum speed of 110km/h. It is designed for short-range urban flights so this range is entirely suitable for its purpose. VoloConnect, however, will cover greater distances between urban and suburban areas so its design reflects its application.

Also, VoloCity’s multirotor system is far better suited for an urban environment. Vertical lift is important for both eVTOLs but will see more use in a short-range urban setting. Similarly, a rotor system is more compact and therefore is a more sensible choice for flying around buildings.

One significant difference is the number of seats: VoloConnect has four, whereas VoloCity has two. This implies VoloConnect might providing a ride-sharing service, making fewer journeys with a more economical model, while VoloCity will provide more frequent individual journeys across the city. Even so, it is clear that both aircraft will form a holistic urban air mobility ecosystem.

What Does this Mean for Volocopter?

Volocopter’s introduction of a new type of eVTOL marks a clear push for market dominance. Its previous aircraft only covers short-range urban flight, leaving the mid-range flight market open to competition. The VoloConnect promises to close this competitive gap and allow Volocopter to provide a complete service for customers.

We could read this as a sensible move by a company that has previously shown intentions to develop such a holistic ecosystem. Volocopter has already showcased its VoloPorts and VoloIQ system, so offering both urban and suburban air travel – and cargo transport – is an obvious next step.

So, when will we see its eVTOLs take to the sky? As we discussed in a previous post, Volocopter plans to launch its VoloCity at the 2024 Paris Olympics. The VoloConnect, however, is slightly further behind. Although the company has already been working on the concept for several years, it expects to achieve certification within the next five years. Therefore, it will still be a while before we see the company’s full ecosystem in action.

As it stands, Volocopter has tested several concepts of the aircraft and are nearly ready to produce a full-scale prototype. We should see a markedly faster journey for the VoloConnect because the company has its wealth of experience from the VoloCity design to call on. While the lift system differs, it has extensive knowledge regarding windows, interiors, and battery capabilities.

Volocopter and its eVTOL Ecosystem

Developing a fixed-wing, mid-range eVTOL is a shrewd move from Volocopter that appears to make perfect sense. It could potentially expand the company’s product offering to cover all a city’s needs, from commuting to cargo transport. It will be interesting to see whether this recent announcement has any impact on the wider eVTOL industry.